Thirteen healthy young men participated in this study. Subjects did not regularly undertake resistance or strength training or participate in competitive sporting events.

The subjects came to the laboratory three times, separated by intervals of at least 48 hours. On the three days, blood lactate concentration and maximum voluntary contraction (MVC) were measured before and after a given exercise, that is, With WB-EMS (E), voluntary aerobic exercise (V) or their combination (VE), and spirometry was performed during exercise. On the first day, the subjects performed V and the familiarization and determination of the intensity of WB-EMS were carried out. On the second and third day, E or VE were applied randomly and each exercise program was carried out for 15 minutes.

Voluntary exercise consisted of a 15-minute full-body calisthenics workout in groups V and VE. On the other hand, the wave parameters used with WB-EMS were a biphasic, quadrangular and compensated wave, with a frequency of 20 Hz and a pulse width of 100 µs. The duty cycle was 4 seconds of electrical impulse and 4 seconds of rest. Also, a frequency of 2 Hz was applied during warm-up and resting times. The intensity was applied at a motor threshold without reaching the pain threshold. During the intervention of the EV group, the contraction and relaxation times of WB-EMS (4sg/4sg) were synchronized with voluntary exercise. 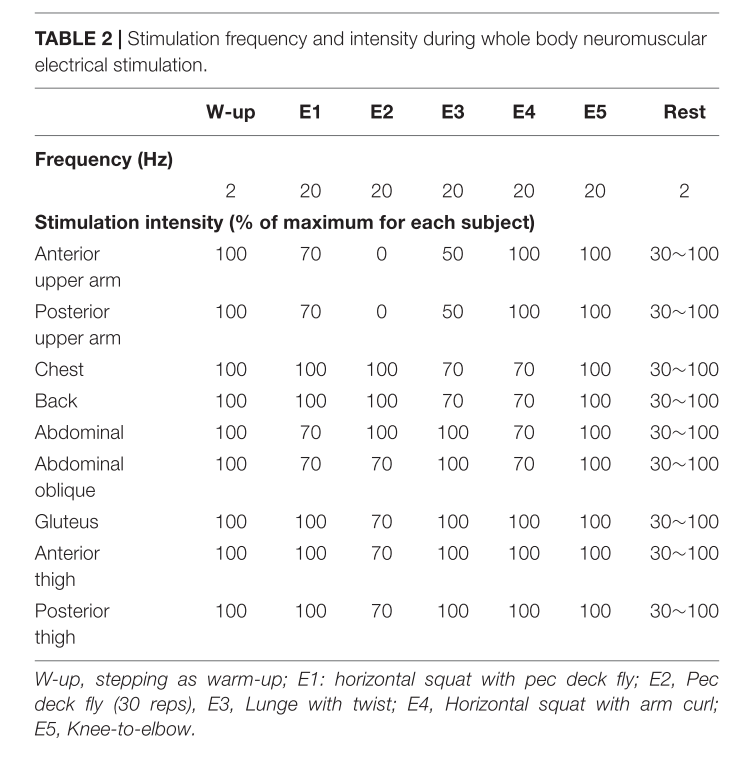