The butt wink produced by the gluteus is a pelvic retroversion that we perform in most cases due to a shortening of the main hip flexors such as the rectus anterior quadriceps and the iliac psoas. This musculature is not fully relaxed and prevents the hip from remaining in a neutral position by exceeding a certain joint range in hip flexion. The lack of ankle dorsiflexion also influences the appearance of the butt wink. In most cases, when we perform a deep squat below 90º, the retroversion usually occurs and this retroversion leads the lumbar spine to a flexion. This flexion of the lumbar spine could increase the risk of injury. For this, we propose a reciprocal inhibition technique produced by whole-body electrostimulation to keep the hip and lumbar spine in a neutral position and avoid that butt wink when exceeding a certain joint range and see its effects later, if they are maintained without electro or no.

We propose a practical case where we will first analyze the mobility of the ankle dorsiflexion and see if it is optimal or not. Secondly, we will focus on the hip muscles to see if you have a shortening of the hip flexors (iliac psoas and rectus quadriceps) and correct the butt wink. Third and last, as a complementary technique to the correction of the “butt wink”, we will focus on correcting the knee wink or knee valgus produced by internal hip rotation.

Musculature responsible for the butt wink

The musculature responsible for the butt wink can be the plantar flexors of the ankle such as the soleus and calves, which can limit the ankle dorsiflexion. On the other hand, we have the iliac psoas and rectus anterior hip muscles and their shortening can produce a retroversion of the hip (butt wink) in the squat.

The soleus or triceps sural is shaped like a sole. Their lateral faces protrude to the sides of the lower part of the cufflinks. This muscle originates below the posterior oblique line of the tibia, head of the fibula, and a posterior proximal third of the fibula. Its insertion occurs on the tibia at its medial border. Its function is the extension of the ankle or plantar flexion. 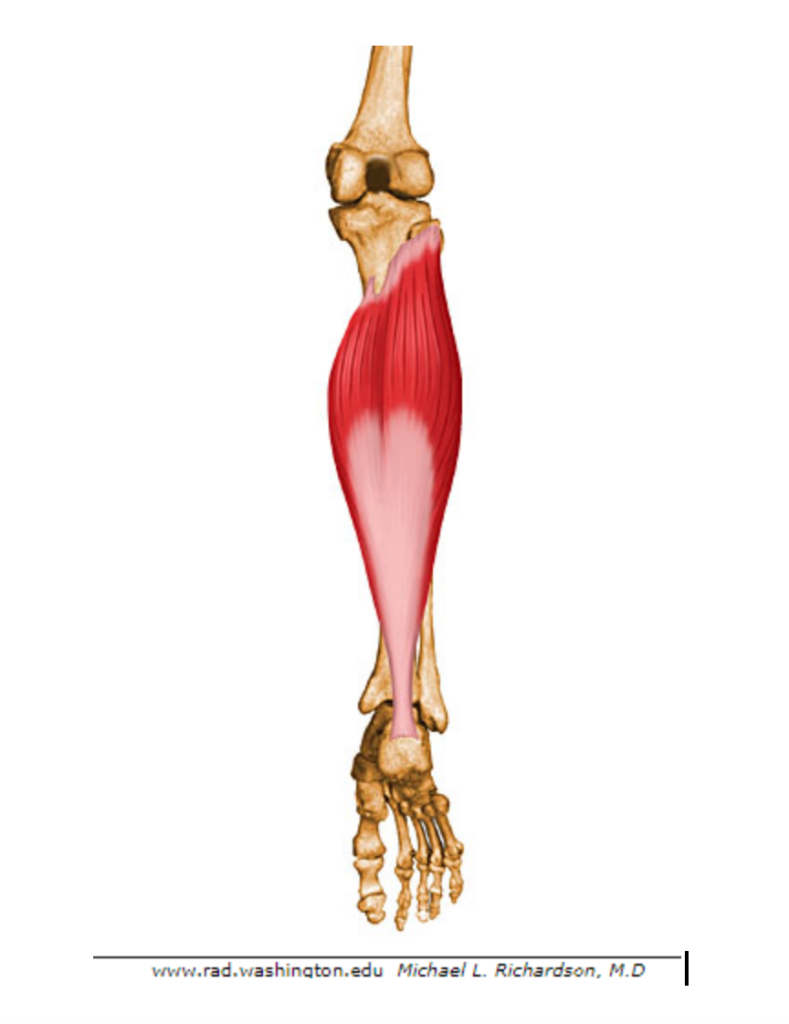 The twin is made up of an external head and an internal one, of which the internal one is the highest and thickest. They are also called Gastrocnemius. The internal head of this muscle originates from the posterior superior aspect of the medial femoral condyle, much higher than the origin of the external twin. On the other hand, the external head originates from the posterior superior aspect of the external femoral condyle. The two heads make a curvilinear trajectory to form the lower popliteal rhombus and insert into the posterior aspect of the calcaneus. Its function on the knee is to stabilize the femur, to prevent it from unbalancing forward in flexion movements, it also has the function of flexor whenever the knee is extended and the ankle flexed. On the ankle it has the function of extensor with tendency to the inversion. 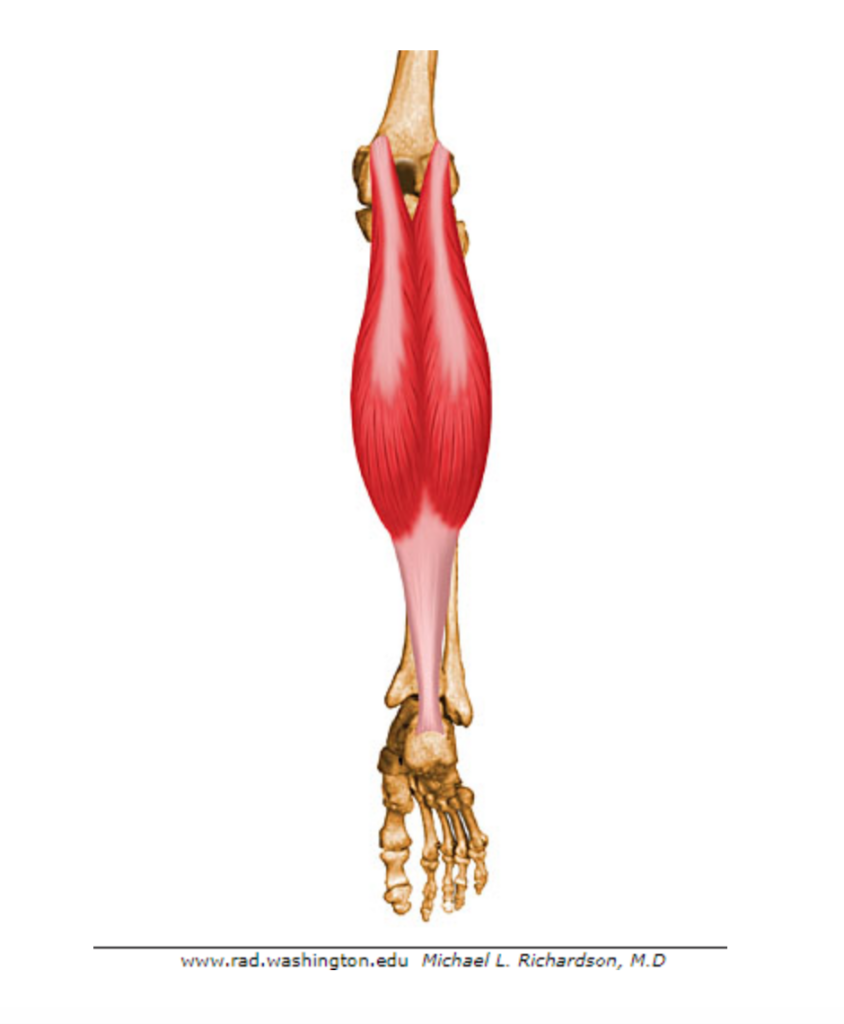 The Psoas is a biarticular muscle that is composed of two muscles: the iliac and the psoas, which in turn could be divided into psoas major and psoas minor.

The psoas major attaches proximally to the body of the T12, in all lumbar vertebrae and through thinner fascicles, in the transverse processes of the lumbar vertebrae. More distally, it passes anterior to the sacroiliac joint and continues along the pelvic rim, passing anteriorly through the roof of the hip joint.

On the other hand, the psoas minor that originates from the anterolateral aspect of T12 and the first two lumbar areas and inserts on the pectineal line.

Finally, the iliac muscle originates from the upper two thirds of the inner surface of the iliac fossa, all the way to the lesser trochanter. 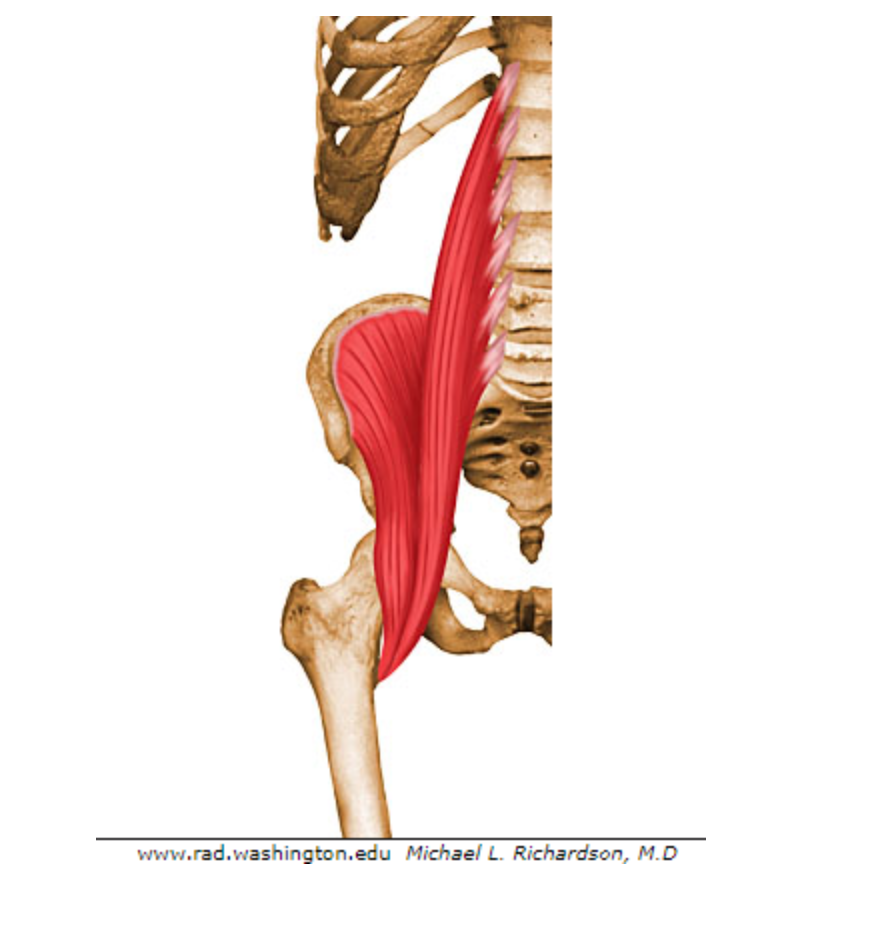 The rectus anterior is a portion of the biarticular quadriceps muscle, originating from the anterior inferior iliac spine and attaching to the superior border of the patella. From there, it continues along the anterior face of the patella until reaching the anterior tibial spine through the patellar tendon. The action of this muscle on the hip is flexion with a slight tendency to abduction and pure extension on the knee. 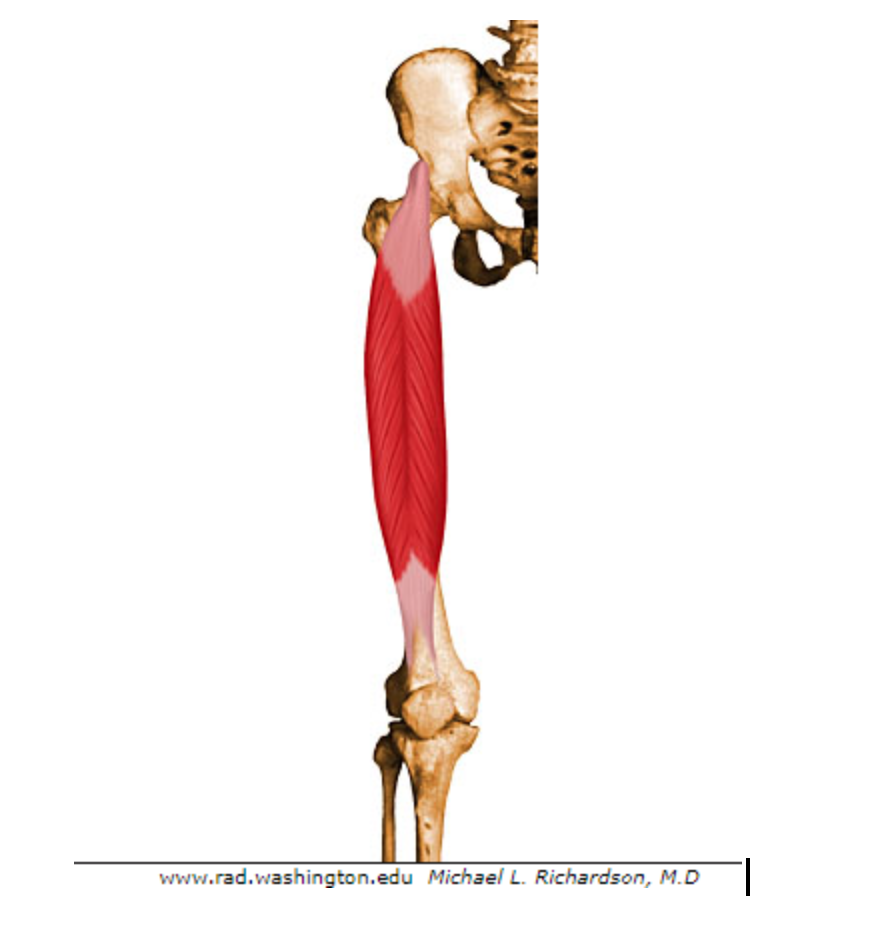 The ‘’ Sherrington Principle ’’ or reciprocal inhibition occurs when a muscle contracts due to a nervous action, said muscle would be the agonist and, on the contrary, the antagonist muscle receives a simultaneous signal that inhibits it. For example, if we perform a gluteal contraction, its antagonist, the iliac psoas, relaxes.

Sherrington’s laws are those that govern mechanical activity during muscle contraction and are:

Electrostimulation (EMS) of the lower extremities causes muscle contractions by activating fibers, which can modulate the excitability of the central nervous system.

In a study it was seen that the application of EMS for 60 seconds with a medium frequency protocol (40 Hz), with a pulse width of 300 µs and a motor threshold intensity can produce an inhibition in spinal reflexes for 15 minutes [ 3]. Knowing this, we can think that EMS can be very useful to provoke a reciprocal inhibition and to correct the ” butt wink ”.

Intervention of the practical case

Intervention on the ankle

We will perform a dorsiflexion on a wall measuring the distance of the joint range (from the wall and tiptoe). Once we have the measurement, we will connect the electrostimulation in the soleus and calf with a frequency of 40 Hz, 300 µs of pulse width with a motor threshold intensity for 60 seconds. After the electrostimulation work cycle, we will do the dorsiflexion again and see if the joint range has increased, how much this joint range has increased, and for how long this improvement is maintained.

Intervention on the hip

Intervention on the knee