Low back pain (LBP) is one of the leading orthopaedic diseases worldwide and affects almost everyone at least once in a lifetime [2,3]. In approximately 80% of cases, the cause of low back pain is not known and is declared nonspecific [4]. Physical exercise can be a good alternative to treat such ailment. This study confirmed that whole-body electrostimulation (WB-EMS) can produce positive effects on back pain [5]. Therefore, the use of WB-EMS with low subjective intensity seems to be an optimal option for unmotivated people or unable to exercise conventionally.

For this study, 30 patients with low back pain between 40-70 years were randomized in two groups: 15 patients with WB-EMS and 15 patients in an inactive control group. The WB-EMS group completed 12 weeks with a protocol of 1 session of 20 minutes per week performing gentle movements dedicated to low back pain.

The WB-EMS protocol was a bipolar electric current with a frequency of 85Hz, with a pulse width of 350us, a duty cycle of 6 seconds of electrical impulse and 4 seconds of rest once a week for 20 minutes. Participants completed one to three series with six easy moves with a minimum range of motion. The intensity of the WB-EMS was regulated by the Borg scale. CR10 (strong: 5 and very strong: 7). On the other hand, the control group continued their daily habits.

In the following table we can see the results obtained in each group. 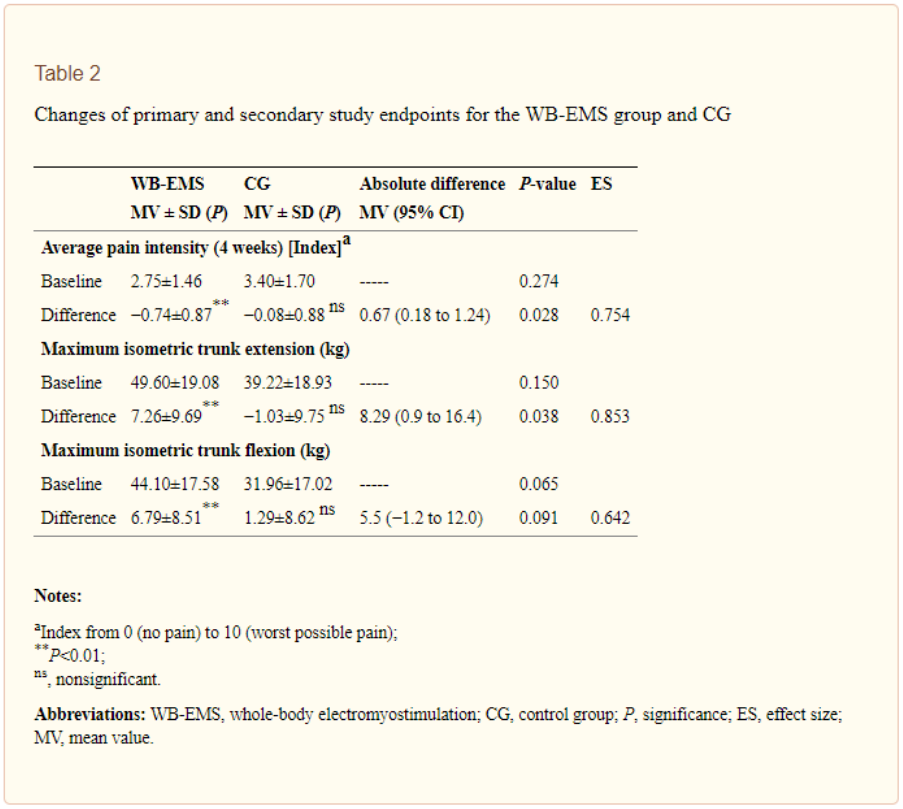 Also, it is an effective training method over time to reduce low back pain and increase strength in people with such pain.

After this promising comparison with a non-active control group, the research should be extended to include comparisons with active groups.